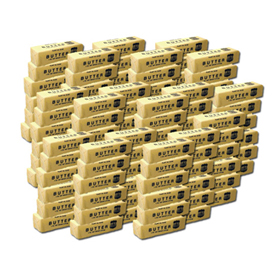 This is what 25 pounds looks like in sticks of butter....which is what I've lost walking....

Greetings of the season, Friends and Neighbors!

I hit a nice milestone this A.M. and that's 25 pounds down, or a total of 8% of my starting weight. I'm pretty excited about that. So I celebrated by going for a nice walk after my shower. Next time, I should reverse that.  ;-)

It seems that last week I went walking crazy; putting in over 83,000 steps and 41 miles for the week ending last Sunday. Unreal to me. Not the numbers so much but that they indicate so much more activity on my part and less sedentary living.

May your home be filled with the Joy and Happiness of the Season and thanks for reading.

It seems like longer than 2 months and six days, but since I started this journey towards better health on October 8, I've now passed 500,000 steps. That's halfway to my first goal whereby I can be remimbursed by my employer for the cost of my Fitbit. 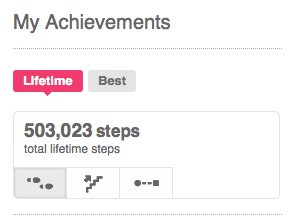 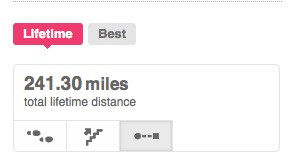 The number of steps works out to 241.3 miles. Which is roughly the distance between St. Louis and Kansas City, so I've walked across the state of Missouri or close to it.

Other accomplisments include pulling my belt tighter, wearing a few of my watches again while waiting for more to come off so the rest will fit, including a shiny Batman watch that I've never been able to wear. I can walk farther without hurting that I could a couple months ago, it takes longer to get winded and I've lost just over 20 pounds in the two months, six days I've been at this.

I still ache when I climb stairs, so this is only the beginning. I am still woefully out of shape, but I'm better than I was. I'm not gonna lie, there are times when I don't think this is doing a lick of good and I want to cuddle with 3 pizzas, a six pack of beer and chocolate cake. I think that's my depression talking, to be honest.

The surest sign I can tell is in my face. There's more of a smile there. And fewer chins.

So, my Fitbit Zip died an unexpected death last Sunday. After a few minutes of wailing and gnashing of teeth, calm returned and I called the store where I purchased it. So long as I had the original packaging (yep) and receipt (again, yep), an exchange would be made with no muss or fuss. I trundled on down to said store, and not just exchanged the Zip, but paid the difference and got a Fitbit Flex which I wear on my wrist.

In the next day or so, I will pass 300K steps, which is close to 135 miles or thereabouts. I've lost almost 14 total pounds, have very sore feet and leg/butt muscles from all this walking and a bit more energy.

I slacked off logging my food and walking as much as I needed to and it showed. I gained a couple of pounds and was ready to tear my hair out, quit, eat a bag of marshmallows, something, anything and throw in the towel. Clearly, I didn't do that.

So, marching along I work towards my weight loss goal. Then, I might jump out of an airplane to celebrate!

If it seems like forever since I've written here, it's only because that is so.

A few weeks ago, I took the plunge and bought a Fitbit Zip.  It is in the process of changing my life for the better.  In the past three weeks, I've walked over 150K steps, which is about 76 miles or so, lost just over 11 pounds, changed a few eating habits and consumed enough water to flush 14 septic tanks clean.

In that time, I've gone from drinking several soda's a day to about 1 a week and that's just because I want to.  I'm counting calories and making eating choices based on that and it feels pretty good so far.

When you're a dude who has reached the limit of the clothing options at regular people stores, you can't tell my looking that I've lost any weight.  However, I can tell by a few small things.  One is I can wear a wristwatch again.  Not all of them that I own, but I can wear one in particular and depending on the day, it's not on the 2nd hole in the wristband.  I still get winded doing some basic things, but not AS winded and not AS quickly.  I could slip into a pair of jeans that is a size smaller, but I have to admit it was still snug and a tad uncomfortable so I'm holding off on wearing them as a regular thing.

The best change so far has to be the walks I take with Elaine.  Being outside on lovely Fall afternoons, early evenings or just walking from the far end of the parking lot, it's been great walking with her as we do this.

I think a public record of observations and a few milestones is a good thing, so I'll do that here.

The other day the custodial supervisor for the University where I work showed up at my desk with a couple of rolls of paper towels.  It seems that he'd gotten a call from the regular custodian alerting him to the possible loss of her keys and as a result we may be running low or almost out of paper towels.

The above is what he told me.

What REALLY happened was our regular custodian called her supervisor, alerted him to the possible loss of her keys and that we were about out of TOILET PAPER!  This I figured out when I was ensconced on the throne doing my throne-ly business and realized that there was damned little paper with which to do my paper work with.

This brought forth some amusing emails, somebody getting into their Secret TP Stash, and a bemused custodial floater/flunky to actually bring us more TP, unlock to lock and replace said TP.  That we didn't have to go to DEFCON 11 is a minor miracle.

And yes, they use great big Master Locks to lock the TP dispenser down here.  Why anyone would want to steal the TP from here is beyond me, as I'm sure it's at least 47 grit.

My sincerest congratulations and best wishes to

puckbunny87 on her recent marriage!

I'd squee but that's unsightly for a man of my age and dignity.  (Bwahahahahaha)

All kidding aside, I'm pleased as punch for you and your husband!

I took Elaine to work this A.M.  Not something I do often, but this morning I did.
To get from her office to campus, I drive up Broadway heading into town (That's west for you who are so inclined).  When I reached the intersection of Broadway an College, I was greeted with the scene you see in the photo… 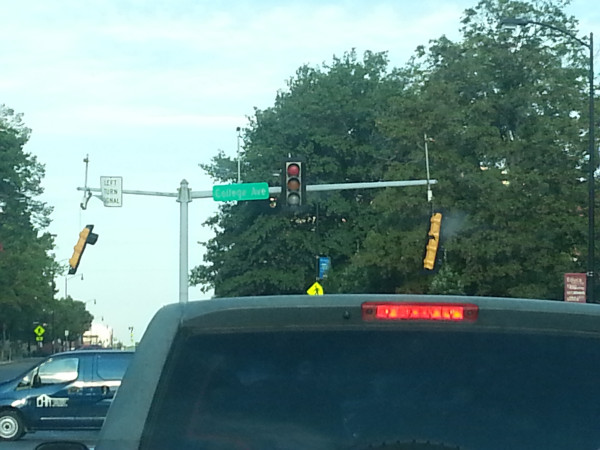 So, the INTERNETS are going ape-shit-ZOMG!-crazy-crazy over Ben Affleck being cast as Batman in the next Superman movie.

My response to the news was and is, "Oh, really?"  (insert yawn here)

Part of me is thinking it's inspired casting.  Actually, most of me is thinking that.  Affleck gets a bad rap for being in some cruddy movies. Gigli comes to mind.  But, I can hear you saying "Because Daredevil" is why he shouldn't be allowed to be in another comic book movie.  In that, you're wrong.

The theatrical cut of Daredevil wasn't so very good.  However, that cut was fraught with compromises and insistence of additions by the Studio.  Such is life.

The Director's Cut of the movie is miles better.  In some respects, it's almost a different movie. It's the only version of the film I own, if that means anything.  The Director's Cut is a prime example of studio meddling and marketing decisions getting in the way of telling a good story.

Affleck is a great actor.  He get's a bad rap for some lousy acting choices (sort of deserved), but he also earned rave reviews for Argo.  So, lighten up!  This is nothing to cause me an existential crisis over...or yourself for that matter.  Because, when you get right down to it, it's just a comic book movie.

Edit:  I gotta admit that the whole NerdSpasms over this have reach such a level of whacky-doo-doo that I find it amusing...
Collapse